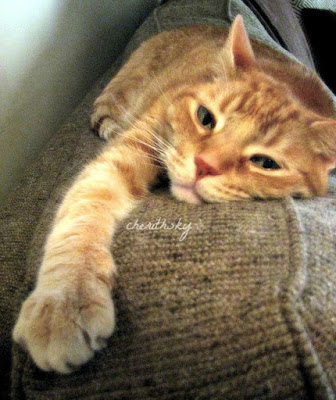 Oscar has been at the vet's hospital for over a week now.   The vet noticed he was having small seizures and started giving him medication to control it.   I've been visiting him when I can and find it hard to watch him.  He is old and frail and has trouble getting around but he still purrs when I pet him.
I remember last week, shortly before I had to take him in to the vet's office, I carried him in my arms to the living room window.  It was still morning-large, downy flakes were swirling down from the soft grey sky.   The world outside blanketed in calming white.   I told him that I wanted him to see how beautiful the world could be.  You know, I think he understood, his thin neck slowly moving so he could watch the snowflakes dance.  Even then he felt brittle, I was afraid I would hurt him.  Oh God I love this cat.   I know everyone who has loved a cat will eventually come to this point in the journey but it's so hard.
I am going to see him again today at the vet's around 3:30.   Dr. B said his appetite was getting better but I don't know if, at this point, I want him to just be medicated. I don't know what to expect.  One moment, I know what I think I should do and then in the next moment I think I'm being too hasty.    So-I'm asking for prayers, or purrs, or your good thoughts.  Thank you.
Posted by Maggie from Stillness at Cherith at 9:40 AM

Maggie from Stillness at Cherith
I love photography, cats, reading and dark chocolate =) Some of the photos on this blog are from my Flickr photo stream. My Flickr name is cherithsky The words you speak become the house you live in Hafiz

Searching for blessings in the rush of everyday life